June 27, 2021 Post a Comment
An annual routine, through the Battle Pass system which in the past also contributed to the total prize pool of The International tournament which has never failed to break the esports prizepool record, Valve also opens the opportunity for gamers to choose which hero will get the next Arcana item. For those of you who are not too familiar, Arcana is a special set of items that not only drastically changes the appearance of the character, but also comes with a variety of unique effects that are pleasing to the eye. After waiting for almost a year, Valve has finally released an arcana item for Specter. 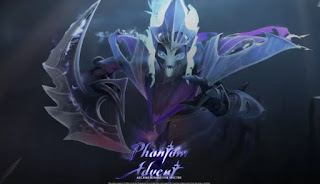 However, unlike the system in the past where gamers could just buy it, Valve decided to tie this Specter arcana to a specific level of the latest Battle Pass they released - Nemestice. The latest Battle Pass, which no longer contributes to The International's prize pool and seems to be going 100% into Valve's pocket, also makes the Dragon Knight – Davion persona from the Netflix anime version one of the content that can be pursued. Arcana Specter itself looks fierce with a dominant silver color, complete with new attack animations, skills, and specific effects.

Those of you who want to pursue the Specter arcana, of course, inevitably have to buy a Battle Pass and the level that falls will break the 1 million Rupiah mark. What do you think? This Specter arcana design looks interesting?