June 09, 2021 Post a Comment
What's the point of a line of waifu characters with eye-catching designs, if you don't have the option to modify their appearance? That there is no way to "remodel" them with alternative looks that are more refreshing and of course, the potential to make them end up more attractive and cute. This is what many gamers have complained about from their super popular free to play RPG action game – Genshin Impact. Fortunately, after almost a year of waiting, at least two of the first costumes for the two flagship waifu characters are ready to arrive!

After being teased briefly before, miHoYo finally showed off summer costumes for two waifu characters – Barbaran and Jean. Unfortunately, you'll have to shell out extra money to get one, especially for Jean. Jean's costume can only be obtained using Genesis Crystals (paid currency), with a figure of around 1,350 at Midsummer Island events and 1,680 outside of these events. 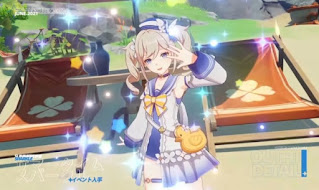 The good news? At least you can chase and hunt for summer costumes for Barbara which will be available for free. To be able to get it for free, gamers must participate in an event called Echoing Tales and get the required amount of resources. But if you are lazy and want to spend real money, Barbara's costume can be purchased for 1,680 Genesis Crystals outside this Midsummer Island Adventure event.

This event itself will start on June 9, 2021 on all release platforms. It will be released along with the 1.6 update. How about you? Interested in spending money on a second summer costume?