July 12, 2021 Post a Comment
This is new news for you players of the MOBA Game developed by Moonton. Where the new hero is waiting for because of his unique basic attack, Natan will finally be released in Mobile Legends.

Nathan is a hero with a Marksman Role, but different from most marksman heroes in Mobile Legends. This hero has basic attack magical damage so the armor that is generally owned by role tankers is not very useful against Natan. 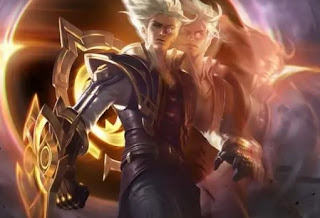 Nathan has 3 active skills and 1 passive skill that can be used to kill his enemies. His Passive Skill converts the damage he deals as Magic Damage, and increases his attack speed every time he hits his skill, Natan's attack speed will increase up to 6 Stacks. The 3 active skills can be seen below:

1st Skill: Superposition: Nathan deals damage to enemies in the targeted area and deals strong damage to the surrounding area.

2nd Skill: Interference: Nathan releases the power of gravity in the specified area, and creates a black hole that will attract enemies and deal damage for 2.4 seconds.

Ultimate Skill: Entropy: Nathan will open a wormhole in the specified area. Nathan can enter the wormhole to directly teleport himself in the area, not only that he will also produce a clone that will imitate his movements and provide additional attacks.

Nathan will be presented on the Mobile Legends Original server on July 23, 2021. Interested players can buy the marksman hero for 32,000 BP or use Diamond.