July 02, 2021 Post a Comment
If you are a fan of Kimetsu no Yaiba aka Demon Slayer both from manga and anime formats, you seem to already know about the video game version that will be born from the cold hands of CyberConnect 2 under the Aniplex banner. Carrying the concept of a 3D arena fighting game like CyberConnect2 games in the past, it is certain that it will only contain protagonist characters as a roster of fighters in versus mode. The good news? For those of you who want a fight against the demons that incidentally became the main title of this series itself, you can enjoy it in story mode. 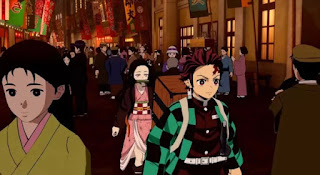 After showing only the Versus mode for the past few months, CyberConnect2 has finally released a special trailer that is presented to show the story mode that it will also offer upon release. Interestingly? Not only fighting from one cut-scene to another, you will also have the opportunity to be interactively involved in the exploration process, of course according to the story in the anime version. Of course, you will fight with so many demons here to move on to the next arc.

Demon Slayer: Kimetsu no Yaiba – The Hinokami Chronicles itself is scheduled to be released on October 15, 2021 for Playstation 4, Playstation 5, Xbox One, Xbox Series, and of course – PC. What do you think? This story mode looks interesting?