August 08, 2021 Post a Comment
The name Activision Blizzard over the past two weeks is indeed not a name that is associated with positive. Scandals about abuse of power, sexual harassment, and a toxic work culture surfaced with strong evidence. Sufficient evidence to bring this case to court and at the same time to make a leadership shift, like it or not, must happen. In a situation like this, it's certainly interesting to see if it will affect the release of games under the Blizzard banner. At least one title has been confirmed to be postponed. 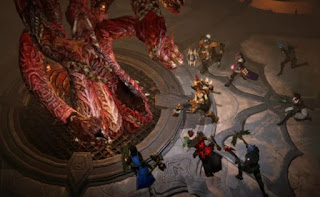 Having passed various alpha tests in the hands of the public, Blizzard actually came with bad news regarding their mobile game that had become a meme - Diablo Immortal. That's right, this game is officially kicked into 2022! Blizzard did not take their internal problems as an excuse, and only wrote that this extra time was needed to apply the various feedbacks from yesterday's technical alpha gamers. This extra time will also be used to add controller support for it.

Unfortunately, Blizzard did not announce an exact release date for this mobile game. How about you? Can't wait to taste this game in 2021?