December 21, 2021 Post a Comment
The presence of the 12th Generation Intel blue stronghold processor with the codename Alder Lake, it turns out to bring changes here and there. The addition of power commands important things, but must be accompanied by the addition of something new. Where else to launch, Intel Core i5-12400F includes the latest cooler model.
Models We Might Have Seen 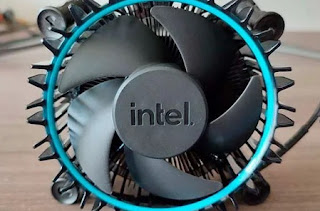 Based on information from tom'sHardware, Intel is rumored to be launching a non-overclocked variant of the Alder Lake processor. Is the Intel Core i5-12400F, which was recently rumored to have launched first in Peru. Through XanxoGaming, a local site from Peru that was given the honor to get a sample processor from Intel.

Previously, there were rumors that the giant Intel would equip their new cooler for the processor with the codename Alder Lake. Now XanxoGaming, which is given the opportunity to unbox the new processor, will provide detailed information regarding this matter.

As it turned out, the rumors managed to come true. Instead of being equipped with the previous Intel cooler, the i5-12400F officially uses the latest cooler model called Laminar RM1.

On the aluminum fin on the Laminar RM1 cooler, there is a blue LED light that emphasizes Intel's signature color. At this time, it is still unclear how to turn on the blue LED light on the cooler. Detailed information about this cooler is that this fan is powered by 4 Pin (PWM).

At first glance, the model of this cooler looks similar to the AMD Wraith Stealth and Wraith Spire. Either because of the many demands from loyal Intel consumers to change the cooler model, or indeed the initiative of the blue giant itself.

The blue giant emphasizes that this cooler is intended for those who do not plan to buy an aftermarket cooler in the future.

And regarding the launch time of this new processor, the estimate is next January.