December 01, 2021 Post a Comment
Recently, one of the free-to-play games with Monster Hunter-like gameplay, namely Dauntless, released a new trailer revealing that the game by Phoenix Labs will soon be arriving on next-gen consoles. Dauntless is slated to launch on PS5 and Xbox Series X/S on December 2, 2022. Besides information regarding the release date, it was also announced that the next-gen version of Dauntless will support 4K resolution, new textures for more pleasing visuals, 60fps support and 90% faster loading times.

Dauntless has actually been available on next-gen consoles since the next-gen console was released, but only works with the help of the backward compatibility feature. Through this latest update, players are expected to be able to play Dauntless at the best resolution and take full advantage of the technology or capabilities of the next-gen console itself to the fullest. It is said that the PS5 and Xbox Series X versions of Dauntless will be able to be played at 4K 60fps resolution, while the Xbox Series S version can only be played at 1440p 60fps. 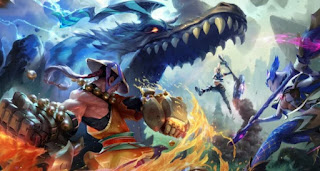 In addition to the increase in framerate and resolution, PS5 and Xbox Series X/S players will be able to enjoy an increase in visuals. Some of these include more realistic lighting effects, longer view distances, trees, water and grass with high-quality textures, and better shadow effects. Unfortunately, it's not known if the visual enhancements will be made available on the PC version, although there's a pretty good chance that PC players will be able to enjoy similar visual improvements.

If the new things mentioned above weren't enough, for PS5 players, the next-gen version of Dauntless will support adaptive triggers in DualSense and 3D audio for more immersive audio. Lastly, PS5 players will also be able to go hunting directly from the Activities menu. It is said that there will be many hunting events launched where players can immediately join other players.

Apart from PS5 and Xbox Series X/S, Dauntless is now also available to play on PS4, Xbox One, Nintendo Switch and PC.