Official! 3 Sumeru Characters Announced to be Present in Genshin Impact 3.0

July 12, 2022 Post a Comment
Right when this article was written (11/07), HoyoVerse announced three Sumeru characters who will be present in the upcoming Genshin Impact 3.0. These three characters are Tighnari, Collei, and Dori whose names have been scattered in various leaked characters of Sumeru Genshin Impact.

Although leaks about them (and the other four characters) have been circulating in the community, this is the first time we've heard an official announcement regarding these three Sumeru characters. 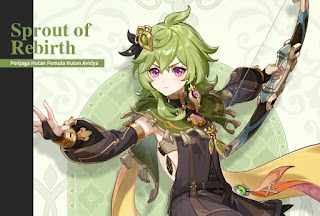 Genshin Impact 3.0 Will Be Attended by These Three Epic Sumeru Characters!

So far, 7 characters of Sumeru Genshin Impact have been circulating in cyberspace and have shocked the community. Today (11/07), players are also amazed by the official announcement coming from Genshin Impact regarding 3 Sumeru characters who will be present at the beginning of Genshin Impact 3.0

1. Tighnari, Protector of the Avidya Forest

First, we will have Tighnari's arrival. He is the guardian of the Avidya Forest or the Avidya Forest. As usual, we are not given exact information about what weapon to use, however, players speculate that he is a bow-user with Dendro elements.

Japan's official Genshin Impact Twitter confirmed that Sanae Kobayashi will voice Tighnari. A veteran seiyuu or voice actor who has had a career since 1999. Through his Facebook account, Genshin Impact also provides a series of information about the lore of Tighnari.

Next up, we have Collei. A user of Dendro's bow and elements, just like Tighnari. He was already present in the prequel manga Genshin Impact, long before the game itself was released.

Ryoko Maekawa will voice her voice. A beautiful seiyuu who so far only filled the voice of side characters only. In his own Facebook post, Collei is described as Avidya's novice ranger.

Lastly, we have Dori. Different from the two characters above, Dori actually mastered the Electro element. However, it is not yet known what weapon he will use. However, the official Facebook page revealed lore from Dori.
That's the official information about the three Sumeru characters that will be present in Genshin Impact 3.0 so far. There is no further information from the developer.

Bloxhero.com (September) To Get Lot of Free Robux Roblox, It's Work

Bloxhero.com is one of the online Roblox game generator sit…